To share your memory on the wall of Carol Williams, sign in using one of the following options:

To send flowers to the family or plant a tree in memory of Carol Monroe Williams Sr., please visit our Heartfelt Sympathies Store.

Receive notifications about information and event scheduling for Carol

We encourage you to share your most beloved memories of Carol here, so that the family and other loved ones can always see it. You can upload cherished photographs, or share your favorite stories, and can even comment on those shared by others.

Gary Williams and Williams Family from Virginia sent flowers to the family of Carol Monroe Williams Sr.
Show you care by sending flowers

Posted Jul 18, 2020 at 04:42pm
Carl, know that your father is at home and at peace. I can only say to you that remember the good times you shared with your dad. You were his rock. Know and trust that you will see him again on the other side. Thank you Lord for the life of Mr. William's.
Prayerfully,
Gwen Mitchell
Comment Share
Share via:
MP

Posted Jul 18, 2020 at 11:53am
Angela,
We are really sorry to hear about your father's passing. I know this is a very sad and difficult time for you and your family.
Please accept our deepest sympathies and most heartfelt condolences for the loss of your father.
Love,
Maxine and Travis Phillips
Comment Share
Share via:
GT

Posted Jul 17, 2020 at 08:22pm
Big Daddy! You are the best. I will miss you telling me your Sunday menu. I already miss the sound of voice, your laughter and your smile.
No matter how long it had been between calls you always knew my voice. I would say "Big Daddy this is Gwen..you would say " I know who this is...you in town?..when you coming"?😍 sorry I didn't get to come before you left.
Give Mama Sarah a big hug and kiss for me. The two of you are two of my favorite people in heaven as you were on earth. Thank you for the love and support you have always given me over the years. You always treated me like your daughter.
I love you Big Daddy. I will miss our long talks on the phone. Rest Well.💕💕

Posted Jul 17, 2020 at 08:11am
Your ship is now in home port. You have stood the watch, fair winds and following seas dear uncle. We will miss you, we find comfort in knowing the spirit has returned to the one whom gave it. Brothers and sister have been reunited, we now stand the watch. That circle of love that shall not be broken, always your family in Charleston SC.
Comment Share
Share via:
GW 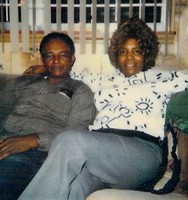