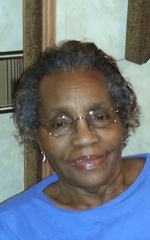 Our Mother, Mrs. Catherine Maultsby Royal, 89, was born July 16, 1930 in Jesup (Doctors Town), Georgia. Mom was born into the union of the late Ed and Isa Mae Maultsby. She received her education in the public schools of Jacksonville, Florida.

Catherine Royal was united in Holy Matrimony to John Thomas Royal, August 23, 1952. Mom worked for the Duval County School Board 33 years, retiring in 1995 as a Cafeteria Manager at Norwood Elementary. After retirement Mom became a social butterfly. She was a member of the Wilder Park Club, Mary Singleton Center, Riverview Community Center and an active member of the EWC Schell-Sweet Community Resource Center, where she enjoyed numerous games, activities, religiously participated in senior fitness classes and assisted with the Food Distribution Program for over 15 years. Mom was our riding partner, she was attached to our hips and enjoyed outings with family and friends.

Mom was an active member of Evergreen Baptist Church with 78 years of dedicated service. Her membership began in 1941 under the leadership of Rev. J. W. Frison, until the current leader, Rev. Elbert Moreland Jr.; whom she so admired. She was a member of District 6, Leader Deacon Sammie Jackson and served briefly as the Mother of the Church. As my cousin LaVert Willams recently posted she was a force to be reckoned with. She and our uncle Herman could be brutally honest and stood for no-nonsense. Through all her toughness she was as gentle as a lamb, a jokester, and sweet with tenderness. Mom was the last living family Matriarch.

The funeral service for Catherine Royal will be held 11AM Saturday, August 17th, 2019 at the Evergreen Baptist Church 1100 Logan Street. The visitation will be 5 - 7PM, Friday, August 16th, 2019 at the mortuary. Interment in Restlawn Cemeteries. Please sign the family guest book and view the video tribute @ www.tswarden.com. Arrangements in care of Tyrone S. Warden, FDIC, 4315 N. Main Street, 765-1234