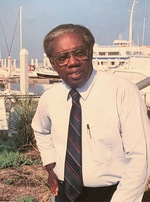 The Honorable Charles L. Albert, Jr. was born in Nassauville, Florida on June 29th, 1932 to his parents, Charles Albert Sr. and Pearl Blue Albert. He confessed Christ at an early age uniting with Prince Chapel AME Church. He attained his early education in a one room school and then attended Peck High School and later went on to receive a BS degree in Biology from Florida A&M University. Further courses beyond his degree included Organic Chemistry from Tuskegee Institute, CBA Chemistry from College of St. Teresa, and Biological Science from Wake Forest University. He also attended Edward Waters College, Institute of Marine Science and University of North Florida. While in the armed forces, he fought in the North Korean War, Veteran Graves Registration. As a civilian, Mayor Albert taught Science and Chemistry for 35 years before retiring from the Nassau County School District. On June 7, 1958 Mayor Albert married his 6th grade sweetheart, Ernie Tyson Albert. From this union was born two sons and one daughter.

In 1978, Mayor Albert was elected to the Fernandina Beach City Commission and in 1981, he became the city’s first and only African American mayor to date, rendering a total of 18 years with the City of Fernandina Beach. Seeing kids from the community active in a positive light was his pride and joy- this led to him organizing the Elm Street Little League of which he was also an avid coach. The field at the Elm Street Recreation Center was later named in his honor.