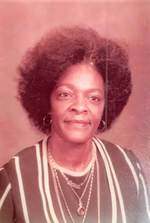 Doris Harris Henry, 91, was born April 22, 1929 to the late John Harris and Annie Mae Roberson in Jacksonville, Florida. She was preceded in death by her brother, Charles Harris, Sr.; sister, Sarah Harris Smith; and best friends, Jessie Houston and Mary Parker. She attended the local schools of Duval County and later graduated from Stanton High School, Class of 1947. She accepted Christ at an early age and became a member of Emmanuel Missionary Baptist Church.

Doris moved to New York City where she later married Leslie Henry on August 28, 1964. Their union lasted 56 years. She retired from City of New York in 1991 where she worked as a social worker for over 25 years. Doris was an active member of the Order of Eastern St. Matthew’s Chapter #143. She was a lifetime member of the Coalition of Black Trade Unionists (CBTU) and American Federation of State, County and Municipal Employees (AFSCME). She was also an advocate for human rights. Doris labored tirelessly helping the community become registered voters. She worked to help elect many local politicians in New York City and Jacksonville. She was an avid traveler and loved to shop for shoes.

On Thursday, September 3, 2020, God in his infinite wisdom called our loved one to a beautiful, resting peace. Doris was a loving and devoted Mother, Grandmother, Sister, Aunt, a devoted servant of God and kind friend to many. Today, lives are richer as a result of her continuous love and dedication.