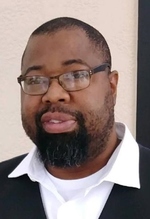 Dwayne was born on September 26, 1975 in Balboa, Panama Canal Zone. He graduated in June 1993 from Hollywood High School in Hollywood, Florida. Immediately following graduation, Dwayne enlisted in the United States Navy, where he honorably served for 17.5 years as an Operations Specialist. Dwayne received his Bachelors of Science Degree in Business Administration on May 2017 in Jacksonville, Florida.