To share your memory on the wall of Lt.Col. Robert Porter, sign in using one of the following options:

Provide comfort for the family by sending flowers or planting a tree in memory of Lt.Col. Robert Porter

Provide comfort for the family by sending flowers or planting a tree in memory of Lt.Col. Robert Porter

After high school, Lieutenant Colonel Porter attended Florida Agricultural and Mechanical University in Tallahassee, Florida where he received a Bachelor of Science Degree in Sociology. His extra-curricular activities included playing the French horn and attaining the position of Rank Sergeant in the world renowned Marching 100 Band as well as a Section Leader in Symphonic Band. He also continued his military training by serving as a Cadet Officer in the Senior Reserve Officers Training Corps (SROTC) Program.

After his matriculation at Florida Agricultural and Mechanical University, Lieutenant Colonel Porter was commissioned as Second Lieutenant in the United States Army. At this point his impressive active duty career spanning from 1954-1975 began. He received numerous medals and decorations including two bronze stars.
As a Second Lieutenant, Porter served as Executive Officer and Commander of an Artillery Battery in the 82nd Airborne Division at Fort Bragg, North Carolina. Upon his promotion to First Lieutenant, Porter served his first overseas assignment as Battery Commander with the 11th Airborne Division in Augsburg, Germany. Later, the Division was designated the 24th infantry Division. His unit was awarded the honor of firing the 21-gun salute for both Hawaii and Alaska when each joined the United States as the 49th and 50th states. With pride and dignity, Lieutenant Colonel Porter celebrated this achievement as the high point of his tour, second only to being promoted to the rank of Captain.
From the position of Captain, Lieutenant Colonel Porter received progressively responsible positions and rankings commensurate with his experience and leadership. During his more than two decades of service, he served at Fort Gordon, (Georgia) Monterey, (California), Thailand, Japan, South Vietnam, North Carolina, Alabama and Pennsylvania. He distinguished himself at every point of service and achieved further rankings as Major and Lieutenant Colonel.

Upon Retirement from Active Duty
Lieutenant Colonel Porter served as the Senior Army Instructor, Junior Reserve Officers Training Corps (JROTC) Program at William Marion Raines Senior High School, Jacksonville, Florida (1975-1998). During his tenure, the Cadet Battalion became a well-trained, highly motivated unit. At the Annual Training and Evaluation Inspections the Cadet Battalion achieved the highest rating as an “Honor Unit with Distinction” fifteen (15) times. The Battalion also received the second highest rating of “Honor Unit”, four (4) times.
Lieutenant Colonel Porter created and coached special units which included male and female Drill teams, Color Guard Units and Rifle teams. These teams performed at school activities and events throughout Jacksonville. These units and teams successfully competed in drill matches in Florida, Alabama, and Georgia.
Under Lieutenant Colonel Porter’s leadership, an effective JROTC Parents’ Club was established. The club met monthly, conducted events and participated in activities to assist in the travel, food and lodging expenses for JROTC team trips. The parents served as chaperones and provided additional support as needed to partner with Lieutenant Colonel Porter in the development of wholesome and productive young men and women.
Lieutenant Colonel Porter left a lasting monument to his service as he supervised the planning and construction of the JROTC Building on the campus of William Marion Raines High School. The building houses the drill area, rifle range, supply room, classrooms, library/study area, and an office space. The building was dedicated to Lieutenant Colonel Robert E. Porter, retired, on October 17, 2015.
Organizational Affiliations

Lieutenant Colonel Robert Eugene Porter went home to be with Lord on Thursday, August 27, 2020 and, was predeceased by his father, Mr. Harry E. Porter and mother, Mrs Daisy Hill Porter.

To send flowers to the family or plant a tree in memory of Lt.Col. Robert Eugene Porter, please visit our Heartfelt Sympathies Store.

Receive notifications about information and event scheduling for Lt.Col. Robert

We encourage you to share your most beloved memories of Lt.Col. Robert here, so that the family and other loved ones can always see it. You can upload cherished photographs, or share your favorite stories, and can even comment on those shared by others.

Posted Sep 03, 2020 at 11:39am
Your legacy of faithful service serves as an inspiration to all whose lives you touched during your tenure. Rest in honor, devoted Christian Patriot.

3 trees were planted in the memory of Lt.Col. Robert Porter

Posted Sep 03, 2020 at 12:54pm
Our thoughts and prayers are with your family at this time. Col Porter was a true friend!

Posted Sep 03, 2020 at 09:25am
We will miss our dear FAMULY member Colonel Porter. He was such an enthusiastic supporter of all things FAMU and was a familiar face at our most interesting events especially during the Rev. Moses G. Miles era within the Alumni Association.
It was the Ancient Egyptians who said that if we should keep the names of the deceased on the tongues of the living then it would seem as though they have not departed this good earth. My husband, Dr. H. Earl Cotman always says at our family funerals that, “We never ever have to think of our loved ones as having passed.”
We are a better FAMULY having known the likes of such a kind and gentle heart as Colonel Porter.
Miss FAMU 1966-67, Jacqueline Nickson Cotman, Author and Award Winning Poet
Comment Share
Share via:
NA

Posted Sep 02, 2020 at 05:13pm
Please accept our most heartfelt sympathies for your loss... Our thoughts are with you and your family during this difficult time.

Posted Sep 02, 2020 at 03:09pm
Please accept our condolences during this time of bereavement 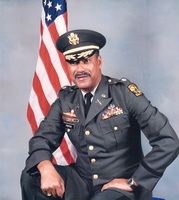