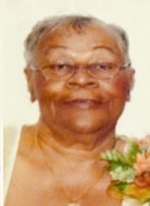 Margaret Smoak was born August 26, 1935 to Everhart Williams and Mary Lee Williams in Auburn, Alabama. She attended the local public schools in Jacksonville, Florida. Margaret was employed many years as a Manager at KFC and later employed at Duval ARC alongside with her mother. She was a devoted member of Spring Hill Missionary Baptist Church where she was a faithful servant. Margaret was loved by her church family and friends. In her earlier years, she married Theodore Smoak and from that union seven children were born.