To share your memory on the wall of Robert LeCount, sign in using one of the following options:

Print
To everything there is a season, and a time to every purpose under the heavens.

A Time to Be Born:
Robert LeCount III, son of Pastor Robert LeCount II (Dinah) and LeVedra LeCount-Manning (Paul) was born in Jacksonville, Florida, Oc... Read More
To everything there is a season, and a time to every purpose under the heavens.

A Time to Serve:
Robert accepted the Lord Jesus Christ as his Savior at an early age.

A Time to Die:
God called his child home to his final resting place on Sunday, August 2, 2020.

To send flowers to the family or plant a tree in memory of Robert LeCount III, please visit our Heartfelt Sympathies Store.

Posted Sep 06, 2020 at 04:28pm
Husband, I will love and miss you forever. Your life meant so much to me. Knowing how much you loved God and witnessing your prayers and life before Him brings me so much comfort. My heart is so broken and I yearn for you daily but I know there’s no place you would rather be now. Me and the boys vow to make decisions that we know will make you proud. You will be missed forever until we are reunited again one day. ❤️❤️❤️
Comment Share
Share via: 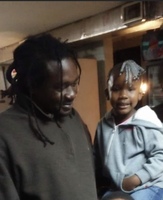