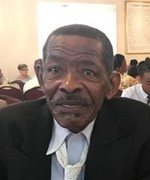 Rudolph Larry Green was born in Jacksonville, Florida on November 9, 1948 to Talmadge and Elsie Green. He received his education in the local schools of Duval County and graduated from Matthew W. Gilbert High School.

Rudolph served his county in the United States Army where he received an honorable discharge. He was later employed at the Naval Air Station Jacksonville and finally as a mail handler with the United States Postal Service.