To share your memory on the wall of AZCM Alister Dial, sign in using one of the following options:

Alister Jerome Dial age 69, was born on September 18, 1951, to James Alister Dial and the late Juanita
Ferrell Dial in Greenville, South Carolina. He was preceded in death by his sibling, Harnetha Rodgers. He
was the fourth of six children and the only male. He had a special relationship with his siblings. Being the
only male, he was their protector and guardian.

His military career began at the early age of 21. Professional excellence and dedication to duty were his
hallmarks during faithful and honorable service. His career began February 1972 and included these
challenging assignments:

Alister was the epitome of a sailor. He served on many of the nation's most powerful aircraft carriers
such as the USS Dwight D. Eisenhower (CVN-69), USS John F. Kennedy, USS Saratoga (CV-3), USS Nimitz
and USS Forrestal (CV-59).

In Alister’s final assignment with the Naval Air Force, U.S. Atlantic Fleet, he served as NALCOMIS Phase II
Team Leader. Due to his untiring efforts, wisdom and experience, AIRLANT forces enjoyed a
substantially higher degree of readiness than ever before.

After retirement Alister gave 15 additional years to the government as a civil servant, working as the
Department Head for AMAMT MTU/CNATTU (NAS) Jacksonville, FL, giving him a total of 43 years of
government service to our country.

To send flowers to the family or plant a tree in memory of AZCM Alister Jerome Dial Sr., please visit our Heartfelt Sympathies Store.

Receive notifications about information and event scheduling for AZCM Alister

We encourage you to share your most beloved memories of AZCM Alister here, so that the family and other loved ones can always see it. You can upload cherished photographs, or share your favorite stories, and can even comment on those shared by others.

Flowers were purchased for the family of AZCM Alister Dial. Send Flowers

Posted Oct 01, 2020 at 06:41pm
Mr Dial, Master Chief, Mentor, and friend will be greatly missed. Praying for your family during this time of loss. The Mengel family

Flowers were purchased for the family of AZCM Alister Dial. Send Flowers

Alister, my friend! I hope you have made your journey peacefully. I want you to know that I will miss you. Especially when I think back to the time I came to see you at your home and we sat in the Patriot room to watch the game. We laughed, got excited , and broke bread together. Very few people have come into my life and have been truly genuine to me. I still remember the first time you walked into my place of work with this prestige and pedigree about you, pocket-square in your suit and yet you complimented me on the suit I was wearing. You didn’t know it then, but that meant a lot to me. I wish I could have watched another Patriot game in your company, or give me tips on suit and tie combinations, or just ask me about an Audi......Thank you! And you are with our Father now and that is comforting to know. I can be happy and rejoice in that. I just want to say that I am thankful to have known you Alister Dial, and thankful for your friendship. You will be missed by me, your lovely wife and family, and all of the other people you may have touched in your time here. Please rest well I want you to know that you were loved.
Comment Share
Share via:
N

My dear brother, AZCM Alister Jerome Dial, Sr. married to my sister Martha, for 50 years. I already miss you. You have been a true brother to me. I always looked forward to receiving a good morning or good afternoon text from you. My heart is sad because of your absent. But I know “To be absent from the body is to be present with the Lord,” You were such a Great man, you loved your family and your fellow man, everyone that came in contact with you knew it because of the things you did. Any time I needed help with my computer, you would talk me through the difficulty on the phone. You always helped me in any way you could. Thank you my brother for always being there for our entire family. Thank you for giving words of encouragement when needed. Thank you for the wise counsel. I thank God for allowing you to be a part of my family and being such a great brother in law to me. You worked hard and walked in your God given destiny. I thank God for you. Thank you Alister for all you did to make life better for others who were blessed to know you. I love you my brother. Rest In Peace!!! We will see you again.
Comment Share
Share via:
N

I went to bed last night, mourning the loss of a longtime (47 years) friend, who passed away on September 21st. Let it be known, I will cherish my friendship with AZCM, USN, Retired Alister Dial, wish for him the peace we all desire. And, I pray that his family is comforted by our Lord. And they accept my condolences. As a fellow traveling man, I ask that the GAOTU accept this laborer, for his heavenly reward. SMIB
Comment Share
Share via: 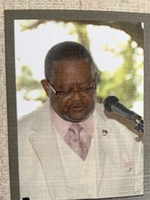 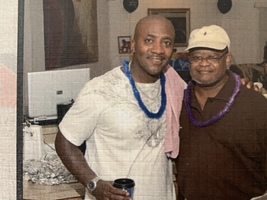 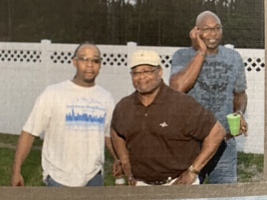