To share your memory on the wall of Lawrence Holmes, sign in using one of the following options:

As the youngest of three sons, Lawrence was affectionately called “Baby Lawrence” and then “Larry” when he moved to Washington, DC. Lawrence attended primary grades at St. Peter Claver Catholic School and went on to graduate from Peck High School Class of 1961. He followed his older brothers, William and Theodore (Ted), to Washington, DC but was drafted into the United States Army. After the military, Larry returned to live in Washington, DC where he worked for the Metro Transit system and later for Duron Paints & Wallcoverings.

Larry studied and trained in Tae Kwon Do martial arts. He operated The Larry Holmes School of Karate where he trained many students (some who became black belts and instructors). Grandmaster Larry Holmes was a member of Simba Do Jang and the United States Head of Family Martial Arts Association / International Hall of Honor Hall of Champions. Larry loved music and had two bands – Triple Threat and The Instant Groove. He sang lead vocals and played congas. Larry had a great spirit and a good sense of humor. His non-judgmental personality garnered him many friends and he always encouraged anyone that crossed his path.

To send flowers to the family or plant a tree in memory of Lawrence Augustus Holmes, please visit our Heartfelt Sympathies Store.

Receive notifications about information and event scheduling for Lawrence

We encourage you to share your most beloved memories of Lawrence here, so that the family and other loved ones can always see it. You can upload cherished photographs, or share your favorite stories, and can even comment on those shared by others.

Posted Apr 22, 2020 at 06:51pm
I will always remember Larry for his warm spirit and sense of humor. He befriended his loving wife's friends as his own. Thanks for the home cooked meals that were not only beyond delicious but served with love as though you were in a 5 star restaurant. I'm also grateful for the wisdom shared with my son as a student of Tae Kwan Do. A life well lived. Until we meet again. 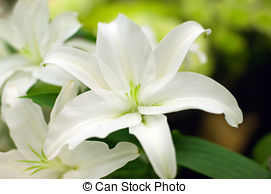 Posted Apr 18, 2020 at 11:48am
I want to thank you for loving me as if I was your daughter not just your PeeWee mother. I am going to miss your stories, your words of wisdom, and the way you seen the good in everyone. No judgment! I love you Pee Wee Sr..lol.. Larry you will be greatly missed, but your memories I will cherish.
Love Annette (Nette)
Comment Share
Share via:

Posted Apr 18, 2020 at 11:06am
My story with Uncle Larry began before I entered the world. Little Miss Purpose is what he called me. “You have a purpose for being here Nyla”, words I won’t get to hear again. The story of the 5th principle of Kwanzaa, Nia, I won’t get to hear anymore. I took for granted this story I’ve been told my entire life. I wish I could hear it just one more time while. Thank you for the song you wrote for my girls, we will treasure it forever ❤️ I love you so much Uncle Larry, until we meet again.
Comment Share
Share via:
HW

Posted Apr 17, 2020 at 02:15pm
May the Holmes Family accept my deepest condolences. I really enjoyed the times Larry and spent together laughing and talking. Larry was a very good guy and I will definitely will miss him. RIP my good friend.
Comment Share
Share via:

Posted Apr 16, 2020 at 03:07pm
For almost 10 years, if it was Thursday night, I was dancing to The Instant Groove. It was the best part of the week, a re-charge, a lift to heart and spirit, a joyful night of dancing and being with friends lead by the man on the Congas with the killer voice. Everyone was welcome to the party. As a performer and musician, I am so grateful for the joy Lawrence spread. As a friend, I am grateful for our discussions about politics, recipes, books, family and our very different worlds growing up.
My husband Jeff and I offer our deepest sympathies to Connie, the family and all who feel the loss of this sweet man.
Comment Share
Share via: 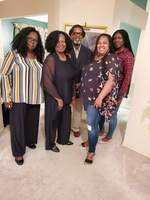 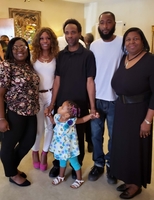 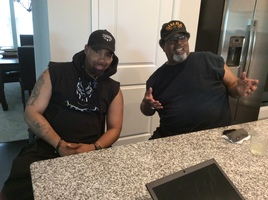